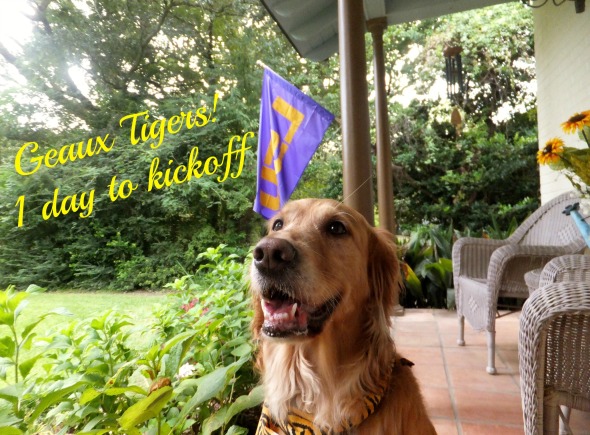 Well friends, in just a little more than 24 hours, my LSU Fighting Tigers will kick off the 2014 college football season. To say that the level of excitement at my house is off the charts would be an understatement. Mommy has planned a lovely brunch for the humans to enjoy during ESPN College GameDay; the refrigerator is stocked with adult beverages; and the pregame dinner menu is set. Mommy has painted her nails purple and laid out her gameday attire. You’ll be happy to know that Daddy has not painted his nails purple, but his gameday outfit is ready to go. And, of course, I am all set with my tailgating treats, LSU collar, Tiger bling, and bandanas for both halves of the game. We’ve raised the LSU flag . . . and we are ready for some football!

Thank you so much for joining me on my countdown to the start of LSU’s football season. If you don’t have a favorite college team, I hope you’ll consider pulling for the LSU Tigers. If you do have a favorite team, then I wish you the best of luck this season . . . unless, of course, you’re playing my Tigers. 🙂 Geaux Tigers!

Are You Ready for Some Football? 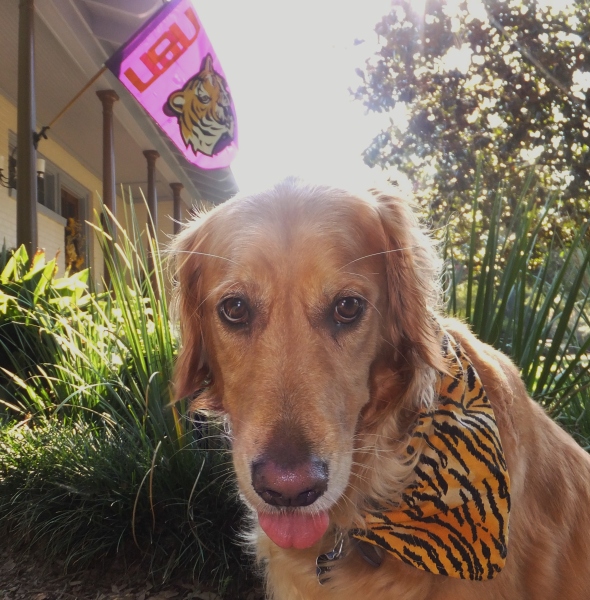 You probably already know that I am a huge fan of Louisiana State University, not only Tiger athletics but also the academics and the school’s history and traditions. I have taken you on a tour of the lovely LSU campus and I have told you all about the treatment that I receive for my elbow and hip dysplasia at the LSU School of Veterinary Medicine. And I dedicated my second blog post ever (almost one year ago now) to LSU Tiger football.

Well, friends, it’s been a very long time since last New Year’s Eve when I watched in horror as my Fighting Tigers fell in defeat to the wanna-be-Tigers of Clemson at the Chick-fil-A Bowl. Not the happiest way to end a season. But all that misery ends tonight and hope once again springs eternal when the LSU Tigers take on the TCU Horned Frogs in the House that Jerry Built. My humans have been preparing for the game for two days–and by “preparing” I mean indulging in adult beverages, eating special gameday food, raising the new LSU flag, and selecting the perfect (and hopefully luckiest) clothes to wear.

All of this game prep has been nothing short of exhausting, and the game doesn’t even start until 8 o’clock tonight. So I think I’ll just put my head down on this pillow and take a little nap. Because in a few hours when the clock strikes eight and the LSU Fighting Tigers rush the field behind Head Coach Les Miles and the Golden Band from Tigerland strikes the most famous four notes in all of college football, a new season begins. The slight disappointments of last year will fade away, and all things will be possible. I am more than ready for some football. Geaux Tigers!

It’s GameDay and I am ready for some football. You may have noticed from my collar in the last post that I am an LSU fan. Today the Tigers open their SEC season against Auburn, so I have raised the flag and donned my finest tiger-print bandanna. Check out my profile. 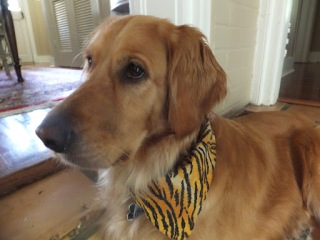 There’s a certain amount of preparation required from LSU Tiger fans, even for an away game. We have to select a lucky place to sit–or sometimes stand if the game gets too close. I’ll probably alternate between the rug in front of the television and one of my beds in the den. We have to decide what to eat for the game. I’ll probably have my usual dry food and maybe a rawhide treat. More importantly, we have to decide what to drink for the game. While I normally stick to water, GameDay calls for something special.

I know  I look like I’ve had a little too much, but I’ll be ok. I’ve been doing GameDay since I was a puppy. 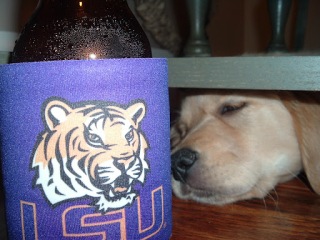 So here’s to my LSU Football Tigers. Have a great game and . . . 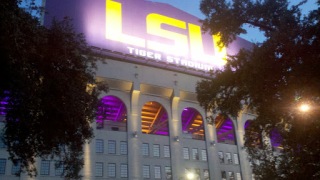