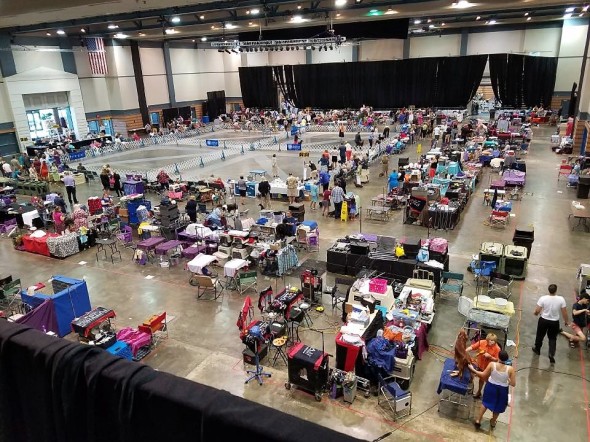 Tallulah and my humans went to the Lagniappe Classic Dog Show to see Tallulah’s littermate Sobe, who was competing for her final championship points, and their breeder Kelli from Rhythm Golden Retrievers.

Tallulah may not have been in the ring, but Kelli made her feel like a show dog. Tallulah got to go back to the holding area, visit with the competitors and their handlers, and hop onto the grooming table while Kelli gave her a Golden champion trim.

And then Tallulah (left) and Sobe joined Kelli outside for a little love fest . . .

. . . before posing for their “official” Lagniappe Classic Dog Show photo.

My sweet sister may not be a real show dog, but she’s our little Tallulah Bee CCG (Champion Companion Golden).

My human mommy was hoping for the elves to show up to help her with all of this. Instead, she just gets me...and all the moral support I could possibly offer. 😉🎄 🎅 ~Tallulah Bee
Happy #tongueouttuesday! Water drops from the fountain are not as close as they appear. 👅💧😉 ~Tallulah Bee 🐝 #tot #opticalillusion #goldenretrievers