Meet The Girls and The Boy (aka The Big Dogs) 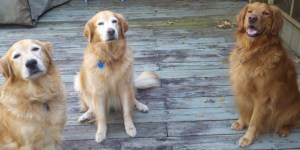 I am so excited to introduce you to The Girls and The Boy, also known as The Big Dogs. That’s Sunshine in the middle with two of her puppies, Maggie on the left and Kenai on the right. They are my second family, and I love, love, love them. When my humans go out of town (and can’t take me with them), I often get to stay with The Big Dogs. What a treat for me!

Sunshine is 12 years old, and she is the sweetest dog you could ever meet. Her favorite toy is her Minky (that’s Monkey in Sunshine speak), and she adores her Minky. Every night, she finds her Minky–wherever he may be–and carries him to her bed. Sometimes I have a little lapse in judgement and decide to play with Minky. I hope that doesn’t upset Sunshine too much. 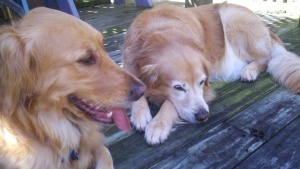 My human mommy is constantly begging me to leave Sunshine alone. She tells me that Sunshine is old and that she has already put up with puppies so I need to stop bothering her . . . but I just can’t help myself. I love Sunshine, and I always want to be right next to her.

When Sunshine had her puppies, her humans made little prints of each of their paws and had the paw prints framed. The beautiful work of art hangs in The Big Dogs’ humans’ kitchen. My human mommy thinks this is the sweetest thing.

Maggie is one of Sunshine’s puppies, and she has been with her humans since the day she was born eight years ago. Maggie runs the show. She decides when it’s time to eat and when it’s time to walk. On the walks, Maggie insists on being the lead dog. When I get to walk with The Big Dogs, I like to catch up to Maggie and take the lead by a nose; but Maggie quickly regains her position (sometimes at the expense of the human who is holding her leash).

Maggie is the most masterful lizard chaser ever. You should see her technique: She goes into the flowerbed and starts tapping her foot to flush out Mr. Lizard. She is quite obsessed with this activity, and I have to say I love to watch her. If I pay close enough attention to Maggie, maybe one day I too will be a masterful lizard chaser. 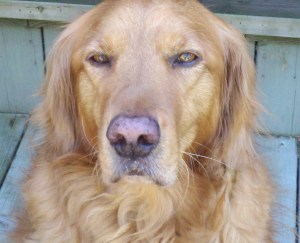 And this is Maggie’s littermate Kenai, sometimes known simply as Boy. When Sunshine’s puppies went to their new homes, her humans told each new family that if, for any reason ever, they found that they could not keep one of the puppies, Sunshine’s humans would take the puppy back. About three years ago, Sunshine’s humans got a difficult call from Kenai’s family. Sadly, they had to say goodbye to Kenai; so The Boy was reunited with The Girls.

Kenai is, simply put, regal. He stares out upon his garden as if he is king of all. Sometimes he seems very aloof, but then he shows his super affectionate side when he snuggles with his humans. He is special, and I am quite thankful that he has rejoined the clan.

So now you know The Big Dogs (Maggie at the top, Sunshine in the middle, and Kenai at the bottom). They are truly special and I am so very thankful to know them.

New Orleans and Louisiana finally got a little national attention in the COVID-19 talk. Seems like a good thing, right? Wrong! Now you might be hearing, "Well, if they'd canceled Mardi Gras none if this would be happening." When you hear that, remember this: 2-15 first weekend of parades, 12 cases nationally, 0 in Louisiana 2-22 second weekend of parades, 14 cases nationally, 0 in Louisiana 2-25 Mardi Gras day, 14 cases nationally, 0 in Louisiana 3-9 first New Orleans case discovered 14 days after Mardi Gras And please don't forget this statement by @realdonaldtrump one month ago today, and one day after Mardi Gras: "when you have 15 people, and the 15 within a couple of days is going to be down to zero, that's a pretty good job we've done." So, please, don't blame New Orleans, and educate the people who do. #COVID-19 #COVIDNOLA
This is frightening.