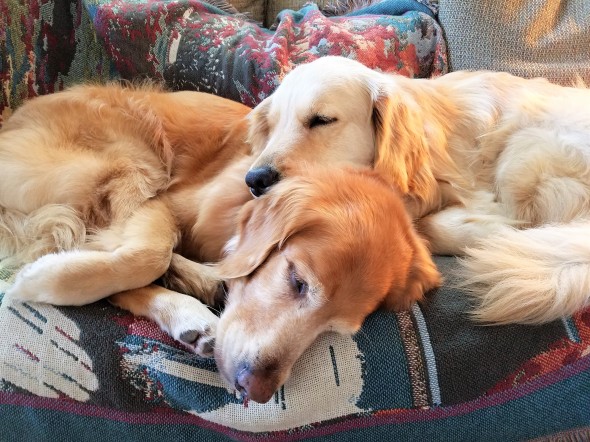 You’ll have to forgive us today. Tallulah and I are slightly exhausted from preparing for the Pet Supermodel Contest that our human daddy’s company holds every year. Each Winner (that’s what they call the employees at Impact Advisors) is invited to submit a photo or photos of their pets. The voting is open for two weeks and anyone can vote once every 24 hours. The top three vote getters win $150 to $50 in pet supplies or services. 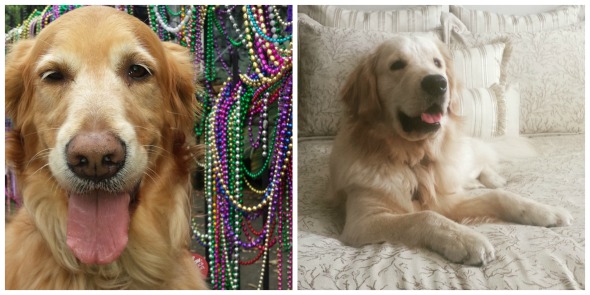 Last year, we submitted separate photos. We did well–finishing in fourth and sixth place, thanks to all of our wonderful friends who voted for us–but we suspect that the separate entries might have split our votes. So this year, the humans got wise and decided to enter one photo featuring both of us. (I mean, who can resist two Golden girls in one picture?) From literally thousands of photos, the humans narrowed it down to four and then picked the one that we will enter in the contest.

These three contenders were the runners-up to the photo that we’ll be entering. Voting begins this coming Saturday (August 26), so expect to see our Impact Advisors 2017 Pet Supermodel Contest photo in a special Saturday edition of Sunday Sisters. And then expect daily begging for votes. (Hey, we’re dogs, so we’re really good at begging.) You might get a little tired of the begging, but we want you to know that it’s for a good cause. If Tallulah and I finish in the top three, we’ll be donating our prize to Zeus’ Rescues at Zeus’ Place.

So Happy Sunday, and get ready to vote vote vote!

Mondays can be hard. Sweet dreams, Tallulah Bee. 💤💤💤
We've had better Fourths, haven't we? Here's a #mondaymemory for you, Miss Harper Lee celebrating Independence Day about 10 years ago. She's happy we didn't pull that headband out this year. 😉