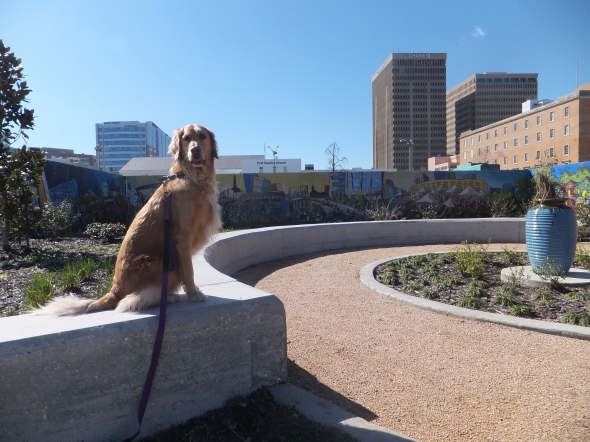 That’s right. My human mommy/blogging assistant is still away. I wonder if she’s forgotten about me. Never! She’ll be back, but until then I think we should revisit some of the beautiful public art in my hometown. I sure wish we could revisit the beautiful winter day when we went to these sites. It’s getting a little hot in South Louisiana. Anyway, Mommy says that a lot of new wall art has popped up since this blog post first appeared and that we’re going to show it to you soon. I think a cool autumn day will be soon enough . . .

Last weekend my humans and I set out in search of Baton Rouge wall art–literally, murals that have been created on exterior walls. Boy did we find a lot of it. My human mommy was inspired by a news story about one of our newest BREC parks, Convention Street Park, which was dedicated late last year. The downtown park includes a 90-foot mural (technically, it is a mobile mural because it’s on canvas and attached to a wall). 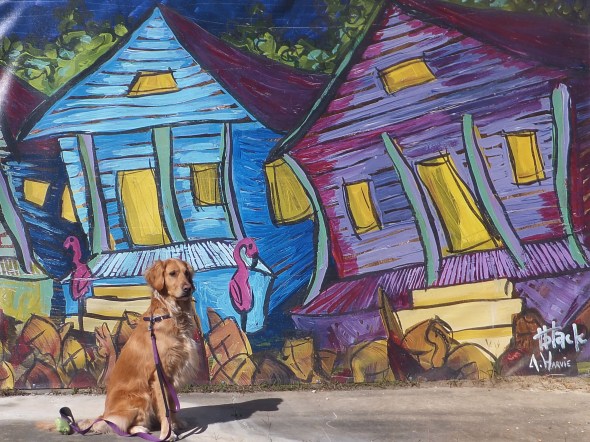 The mural was painted by artists Alex Harvie and T.J. Black as part of the BR Walls Project. This section depicts a downtown neighborhood called Spanish Town, the oldest neighborhood in Baton Rouge, which is famous for its Spanish Town Mardi Gras parade and ball . . . and pink flamingos. It’s a long story. I don’t know about you, but I think I look pretty good flanked by two pink flamingos. 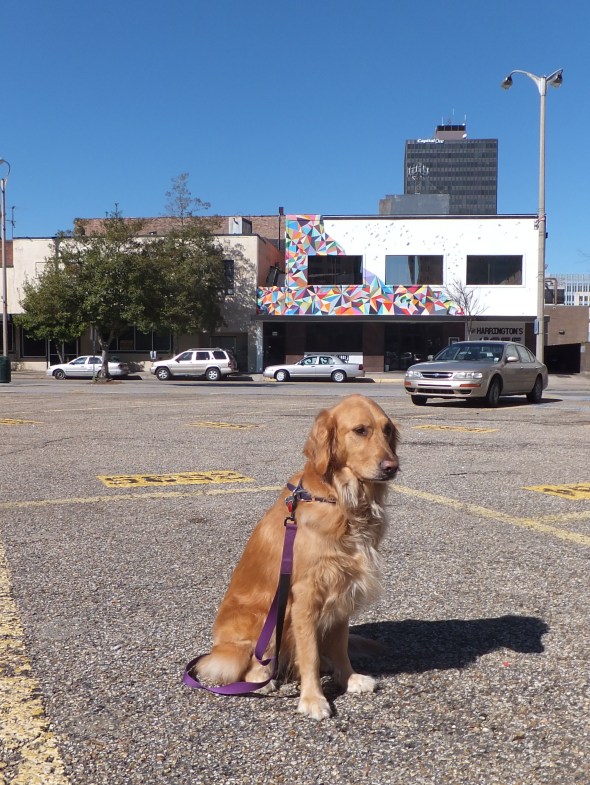 We stopped at two other BR Walls Project murals while we were downtown. The one above was painted by Joseph Konert on the outside of Harrington’s Cafe. It blends the grace of a swarm of butterflies and the expansive calm of the aurora borealis (you just have to trust me on that, or you can click here for a link to the BR Walls Project to see close-up photographs). 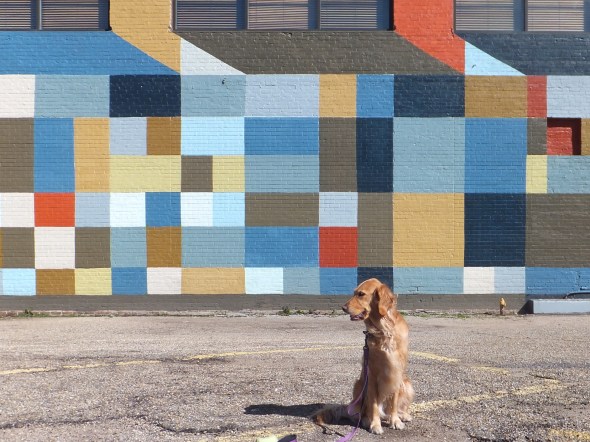 This one was painted by artists Saliha Staib and Clark Derbes on an exterior wall of a building that houses the McGlynn, Glisson & Mouton, LLP law firm. It’s called “Cinq Umbre” and consists of multi-colored quadrangles. I think it even manages to make a dull parking lot look interesting. 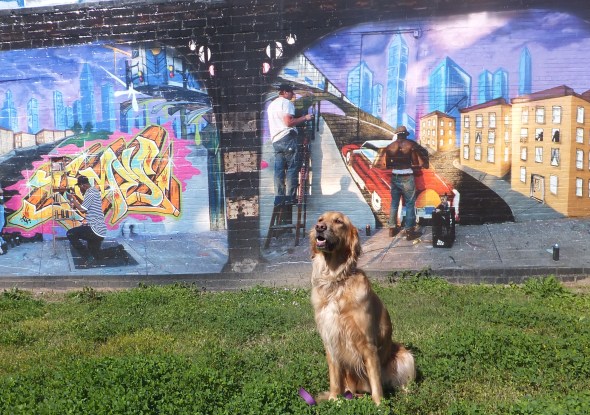 Our next stop was in Old South Baton Rouge, just outside of the downtown area. This mural is on an exterior wall of the old Habitat Imports building about a block off of a fairly main street in my hometown. My mommy and I pass it every other week on our way to the LSU School of Veterinary Medicine, where I do physical therapy for my hip and elbow dysplasia. We’ve admired this very large mural from afar, but we were completely blown away when we saw it up close. This was the first mural completed by the Museum of Public Art. I absolutely insist (as only a Golden Retriever can) that you click here so that you can see the entire mural. 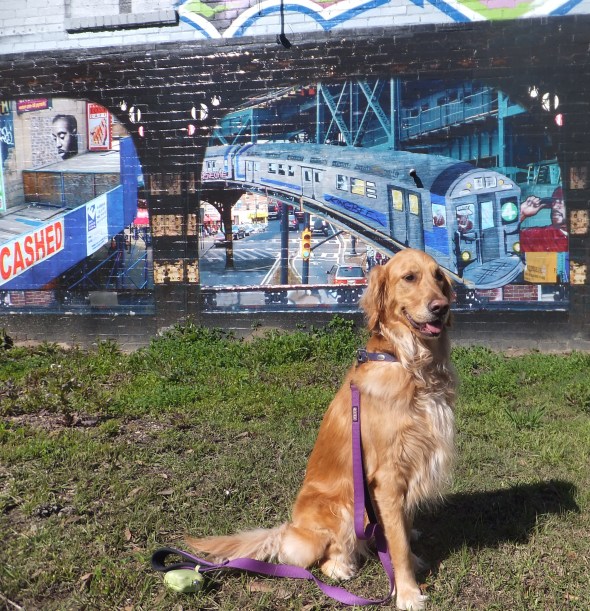 This mural is called “Tribute to the Old School New York Graffiti Artists” and it’s another collaboration. New York City graffiti writers James Top, King Bee, and Part One tagged the top of the wall, which depicts the side of a subway train. Dr. Kevin Harris, who created the Museum of Public Art, painted the bottom portion, which depicts the train trestles and graffiti on the walls of the station. It really is an amazing work of art that is accessible to thousands and thousands of people every day, day after day. 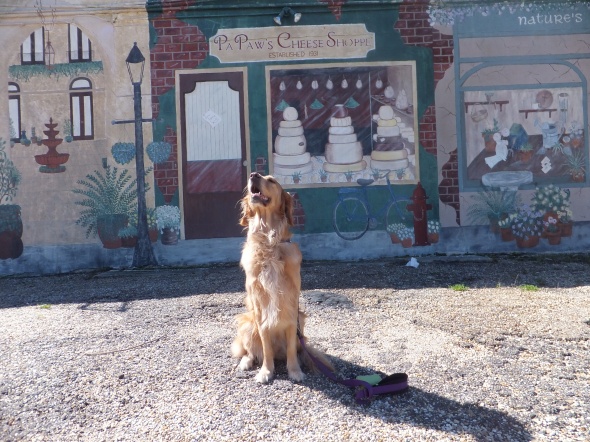 As we continued to travel away from downtown Baton Rouge, we passed through an area known as Mid City. Mid City has its own share of wall art. The photo above is of a section of a mural painted on the side of a vacant building. It was so realistic, I thought I could smell the cheese in the little shop behind me. 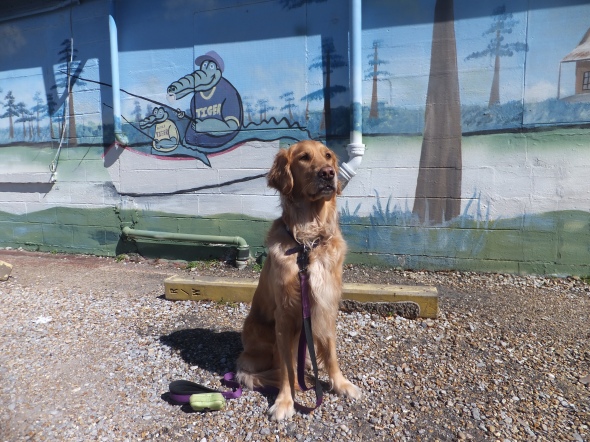 The mural above is on the side of the Jambalaya Shoppe. Do you feel like you’re in the South Louisiana swamp? I wonder if those ‘gators are having any luck with those fishing poles. 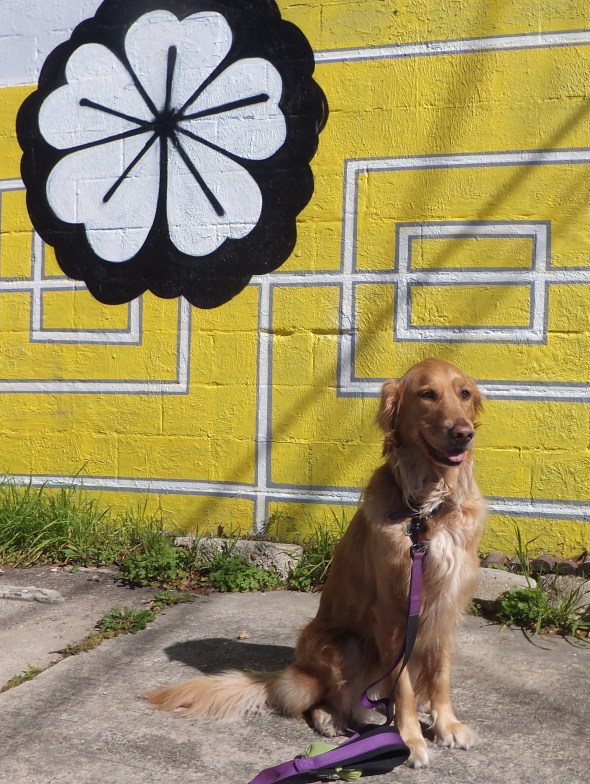 These last two murals are on either side of the building that houses Denicola’s Furniture & Upholstery. 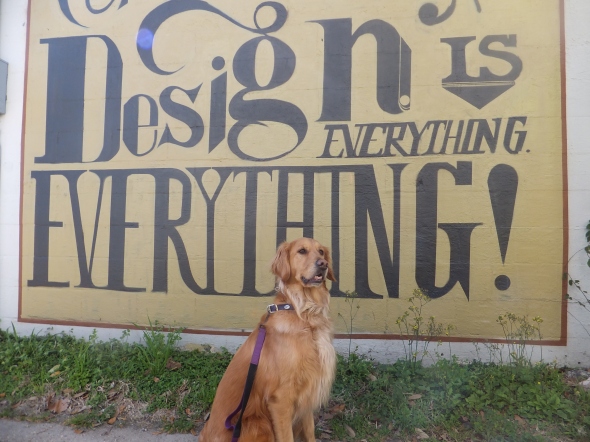 I am so glad that my mommy decided that my human daddy and I should join her in a quest to find wall art throughout Baton Rouge. I have no doubt that we have only touched the surface of our city’s public art offerings . . . and that you and I will be seeing more in the future.